Tethering to the Capture One iPad app is the latest new feature for photographers to take their work on the go. Watch editorial photographer Robert Hall – one third of Sharpen on YouTube – talk time-saving, collaboration, and how he wows his clients using the new tethering capabilities.

“[Tethering to a laptop or desktop] just doesn’t work for me because I am never in a fixed location,” says Robert. The Michigan-based photographer has been playing with the new tethering functionalities on Capture One for iPad since the update to the app came out in September and has seen it open doors to new ways of working.

“Most of my work is on location wherever my clients are. Even today when I am working for my university client, I am going to be in six different rooms in three different buildings all around the campus.”

“I am just not in a fixed scenario that warrants tethering to some type of laptop or desktop setup. But with the update of the Capture One app, tethering is finally in a portable enough fashion that it works for my on-location workflow.”

With an iPad in a sling across his shoulder, Robert is now free to move between locations and in spaces where a cart, external displays, and wires just aren’t practical while still getting the benefits of a tethered shoot.

Having a mobile way to shoot tethered means increased screen size for Robert to view his images as they come in.

“Going from your tiny two-and-a-half/three-inch screen on your camera to a 12-inch or 10-inch screen is just a huge upgrade in terms of visibility.”

He points out that not only can he better view his images on a bigger screen but shooting tethered means that he is viewing and making adjustments to his RAW files and not just the JPEG previews on his camera screen. With the same image processing power as you find in Capture One Pro for the desktop, the iPad app lets you work directly with your RAW files to have full control over the results.

“If you’ve ever gotten home from a shoot and you’re like ‘I thought there was way more contrast.’ That’s just JPEG preview life because you’re not actually viewing your RAW file on the back of your camera; you’re making adjustments to a JPEG version of it that generally has more contrast and saturation. So, you’re making adjustments that are in response to ways that your image doesn’t actually look.”

RELATED: Get flexible with tethering for Capture One for iPad

Discovering what using the iPad for tethering can do for his workflow, Robert has noticed how it brings his clients and collaborators closer to his work. “This is phenomenal in terms of collaboration.”

He has used other apps in the past to give his clients a way to preview and give feedback on his work, but none have hit the spot. Whereas other apps he has worked with take away his control as soon as he shares a preview with his client, using Capture One for iPad lets him continue his work without interruption when he hands the tablet over to his clients.

“Now [they] can look at the images as they come in and add commentary to the session, which makes things go a lot smoother and my experience using the camera is completely undisrupted.” 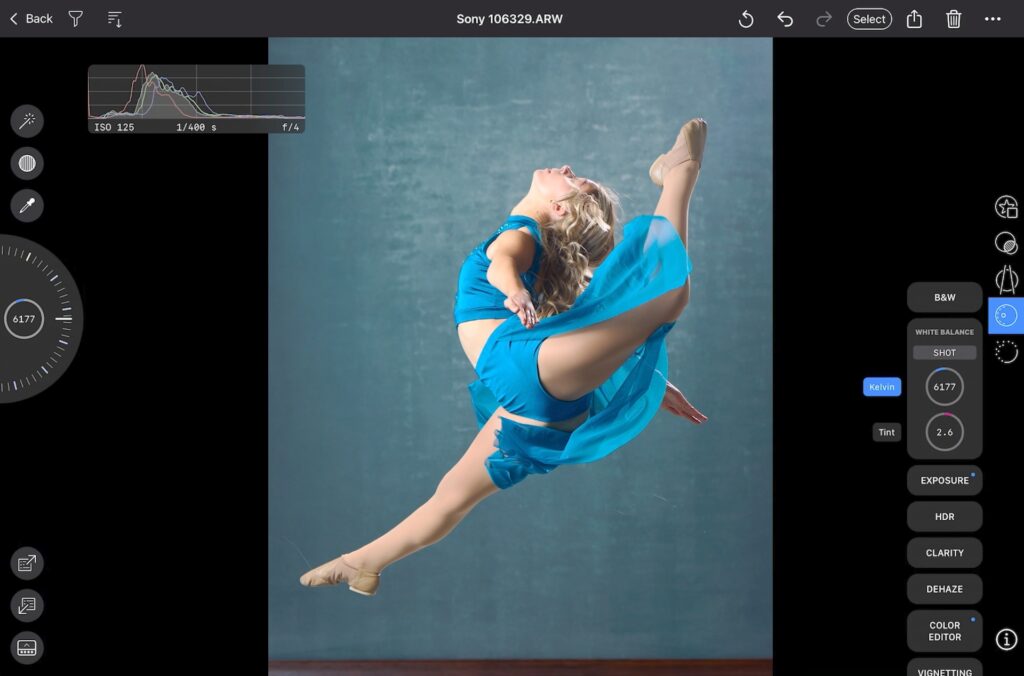 Capture One for iPad has a lot of features that desktop users will be familiar with. This includes Next Capture Adjustments, which lets you apply adjustments to your first shot and automatically add them to any subsequent captures. This means your images are one step closer to the final product as they come in.

“Because you’re dealing with RAW images here, this is really nice especially if you are doing any type of retail experience where you are showing clients images live,” Robert explains.

“Because, let’s be honest, a RAW file is a little bit meh. I mean they are low contrast, low saturation. They are designed to capture as much data as possible. Not just to look visually stunning right out the gate. So, to show clients RAW images, at least retail ones who don’t understand the editing process, might be a little underwhelming.”

For an instant wow effect, Robert adds that you can also select a Style to automatically apply to your images as they roll in.

Fill the empty space in your schedule

“Every photographer has experienced this. We have an 11 o’clock shoot across town 45 minutes from our house. Then we finish and we don’t have anything to do for two and a half hours and then you’re in that zone where you’re like, do I go home to only have 30 minutes at home, what’s the point of that?” says Robert.

“This is just wonderful because it’s a more productive use of our idle time. For me, this will probably largely be culling. You can use either the stars or the color tags and go ahead and rate your images however you want. But there is no reason to stop at culling. If you want to edit on this, you have control of all your typical sliders of color adjustments, cropping, sharpening, all that built right into the app.”

Capture One for iPad has many of the same editing and selection functionalities that you can find on the desktop. Now in a portable package, Robert has found that he can get most of his selection work done before even setting foot in his studio.

“I just had an hour and a half gap, and I culled all the photos from my first two shoots today.”

Want to see what Capture One for iPad can do to elevate your work? Download it here